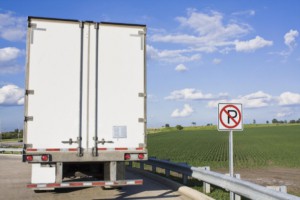 The term ‘underride accidents’ refers to a traffic accident involving a tractor trailer and a smaller, lower profile vehicle, where it can become jammed beneath the trailer section of the trailer. These kinds of accidents are often severely injurious to passengers in the smaller vehicle, due to the tremendous weight of the trailer, and often the traveling speed as well. The underride effect occurs when the trailer crashes through the windshield of the smaller vehicle, generally causing disastrous results.

Normally, when a following vehicle collides with a vehicle in front of it, the fault rests with the following vehicle driver, because the vehicle was not sufficiently under control to prevent the collision. In the case of tractor trailer accidents, however, it is more likely that the driver of the tractor trailer is at fault. Usually due to sudden braking or by driving with non-operational equipment, like tail lights, brake lights, or reflectors.

When such breakdowns occur, the only auto safety principle which might prevent calamity is for the small vehicle driver to maintain a greater distance between the two vehicles.

Underride guards have been mandated on all new tractor trailers by the National Highway Traffic Safety Administration (NHTSA) since the 1990’s, but that means all older vehicles are exempt from the requirement, and need no underride guards. These guards are intended to prevent smaller vehicles from becoming wedged beneath trailers and causing catastrophic injury to the occupants.

In actual practice however, only a relatively small percentage of underride accidents occur directly at the center of the trailer, where the underride guard is installed. The following driver will usually anticipate the impending collision and instinctively swerve to avoid the collision, which means impact will occur at the corner of the trailer, or on the side of it—where no guards are installed.

It is also true that, even in direct hits against underride guards, severe accidents may still occur, because the guards are not sufficiently strong to withstand the impact. Some manufacturers do provide more capable and more shock-absorbent underride guards, but these are more expensive, and exceed the currently mandated specifications issued by the NHTSA.

Vertical supports at the corners of the tractor trailer can reduce the severity of a significant number of underride truck accidents, because they absorb much of the shock from a swerving vehicle, and can prevent the smaller vehicle from becoming wedged underneath the trailer.

Some European countries have also adopted the practice of installing side guards on trailers, to account for swerving vehicles and collisions which occur when a trailer has fish-tailed and is broadside to following vehicles. While this strategy was originally intended to lessen injury to bicyclists and motor bikers, it has also proven effective at reducing the severity of small vehicle accidents.

While there is no doubt that vertical corner supports and side guards would both contribute significantly to the reduction of underride accident severity, they are not likely to be implemented universally until there is an NHTSA mandate to do so. The expense of these additional preventive measures, as well as that of installing stronger rear underride guards, is not something most trucking companies will voluntarily take on.

Until then, the onus will remain on truck drivers to ensure that their vehicles have all indicators and lights functioning properly, and for small vehicle drivers to maintain adequate distance from a tractor trailer ahead, so underride accidents can be avoided.

Of course, this will only address part of the problem. Underride accidents are just one of the common causes of trucking accidents.