Home / Blog / Bankruptcy / What’s the Difference Between a Ponzi Scheme and a Pyramid Scheme?

Both considered types of financial fraud, ponzi and pyramid schemes are quite different in several important areas. The main differences can be found in how the schemes are organized and how many people are involved.

Ponzi schemes are built entirely from the ground up. They’re often very difficult to detect since the fraudulent individual takes great care to hide the truth from unsuspecting investors. As the scheme grows legs, the broker will pay initial investors with money he gets from newer ones to maintain the illusion their investments are creating dividends.

Of course there are no investments to speak of. The broker is mainly lining his own pockets and simply uses those funds minimally to keep investors in the dark. But once a ponzi scheme cannot find any new investors, the fraud is usually exposed.

Bernie Madoff for example was able to trick investors for a long time. But once the economy got shaky and new investors were hard to come by, it became obvious Mr. Madoff was running a ponzi scheme. 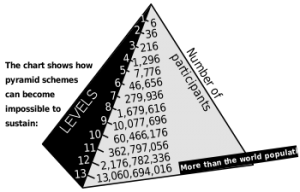 Pyramid schemes on the other hand involve several people, which make them harder to detect. Having the numbers of people give the scheme credibility. Rather than finding new investors, the perpetrator of the scheme recruits more recruiters. Each new recruit a recruiter brings in contributes funds which are distributed to people higher in the ‘pyramid.’

But like Ponzi schemes, once no new investors are found, the scheme collapses.

Learn more about the differences between ponzi and pyramid schemes by reading our newest financial fraud knowledge center article – What’s the Difference Between a Ponzi Scheme and a Pyramid Scheme? – today.